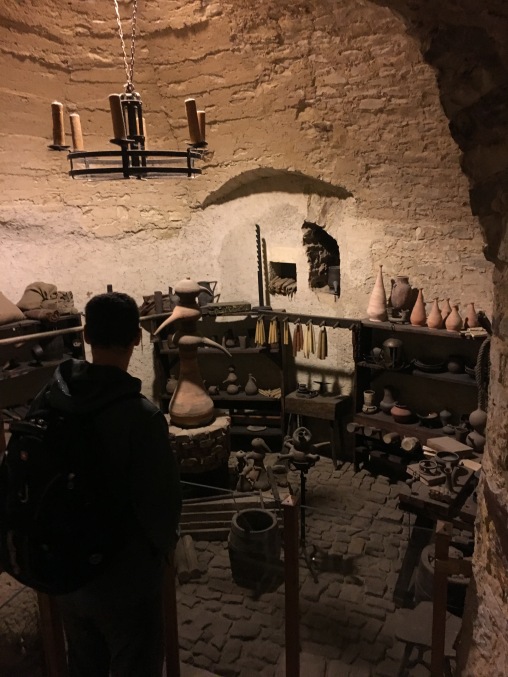 Alchemist’s house on the Golden Lane

Kafka’s House on The Golden Lane

One of the endless quaint cobblestone streets.

Earlier this year, my husband and I trekked halfway across the globe to Prague and Vienna. We like to travel during the off-season to avoid the crowds but often that means enduring winter chills and businesses closed for the season.

While always beautiful, Eastern Europe in mid-March can be dark and frigidly cold. Determined to explore every nook and cranny of the ancient and mystical Prague, we braved the pouring rain, trudging through quaint alleyways and winding streets from Prague Castle to Vyšehrad. It admittedly wasn’t always pleasant, and as I slipped ungracefully down a flight of slippery cobblestone stairs, I cursed our decision to choose this destination over Hawaii.

But ultimately the rich history of the city won me over. It’s easy to see how Bohemian writers like Franz Kafka found inspiration in the seemingly endless (and sometimes maddening) maze of paths through the city and the beauty of the bridges over the Vltava River at sunset. It’s also easy to absorb a darker inspiration from the city’s many ancient churches, dungeons and secret passageways. It’s a city fit for a horror movie.

For a few years around 1916, Kafka wrote from his sister’s home on the Golden Lane, originally built in the 16th century as housing for castle workers. It’s a remarkable place to visit. Some of the small homes are now gift shops, while some remain in the same state as they were back in the early 1900s and before. One particularly memorable residence is that of a former alchemist with experiments still bubbling and brewing – just for the amusement of tourists, but a great way to get a feel for the city’s more mystical roots.

Prague was darker and heavier than I expected, seemingly weighed down by its history of violence, war and oppression. However, that weight is balanced by the undeniable beauty of the city, which thankfully, for the most part, avoided destruction in WWII. The place that sticks in my memory the most is St. George’s Basilica on the castle grounds. Built in 920 (which is unfathomable to Westerners like me), the walls are covered in faded frescoes that are barely holding on after centuries of admiration.

After a few days of exploring its magic and mysteries, I was sad to watch Prague disappear as we embarked upon the train to our next destination – Vienna, a city of music and unexpected beauty.

One thought on “Mysterious Prague”