I will never forget Betty Guy, a truly remarkable woman with a life story worthy of an epic novel. It was the brilliant John Steinbeck who introduced us – indirectly of course. And it was a red raincoat that ultimately brought our paths together. Betty’s legacy will live on through the many inspiring and beautiful pieces of art that she created and through the lives she touched during her 95 years. I’m so lucky to have shared even a short chapter with Betty, and will never forget her spark, her style and her incredible passion for life.

Our story is captured below and her life story is best told here. The post below is a shortened version of my blog series “The Steinbeck Connection,” published (with Betty’s input and edits) in 2010. Here’s to you, Betty… may you always be surrounded with brilliant watercolors, moving operatic arias and the fanciest of teas.

When packing my bags, I was sure to bring my red raincoat. The weather report for England showed two weeks of continuous rain – fitting weather for a literary pilgrimage – dark, stormy and dramatic.

It was the fall of 2009 and I had just finished my masters thesis, which focused on the literary legacies of four California-based writers. John Steinbeck turned out to be my favorite subject and I was enthralled with his letters written in the late-1950s from a small cottage in the southwest corner of England. These letters would have a far greater effect than he surely ever expected, weaving a web of serendipity over the next fifty years, ultimately connecting three Americans in England – a writer, an artist and a student – each with different inspirations but a part of the same story.

The tiny town of Bruton – with its tiny winding streets, quaint shops and restaurants – is a place steeped in history, the storied former stomping grounds of King Arthur and burial spot of the Holy Grail. These legends are what brought John Steinbeck to Bruton in 1959, where he researched content for his book: The Acts of King Arthur and His Noble Knights.

It just so happens that a good friend of mine lives in Bruton; it’s a town that’s become familiar to me after several visits over the years. The Steinbeck legacy is still alive in this tiny little corner of the English countryside. What are the odds that Steinbeck’s little corner would be just the same as mine?

Caroline’s family helped me gain access to Discove cottage, which was Steinbeck’s base while he worked there. On a blustery November morning, we began our adventure. I wore my trusty red raincoat and anxiously stood in the threshold of the main estate, knocking heartily on the imposing wooden door. As we were invited in, I spied the cottage – a modest residence on a windswept meadow. We chatted with the owners who had never read a word of Steinbeck. They handed me a thin, beige book from the shelf titled “Surprise for Steinbeck,” written and published by Betty Guy in San Francisco.

The current owners knew only that Betty was an American artist commissioned to paint a portrait of Steinbeck’s cottage while he was staying there. I thumbed through the book’s illustrated pages, and noticed a color photo taped onto one of the last pages with the caption: “John Steinbeck and Betty Guy, 1959 taken by Elaine Steinbeck.” Betty was a young brunette woman about my age wearing a red leather jacket with zipper pockets. Her smile exuded confidence as she stood next to the towering author.

I set aside the book and we ventured into the torrential rain toward the cottage, where vines crawled up the white stones and an overgrown path led us to the front door through a wild, unkempt garden. In the kitchen I found what I was looking for. The “flagstones . . . smoothed and hollowed by feet” that Steinbeck had written about in his letter to friend Elia Kazan. I took a few meditative breaths there on those stones – the same stones that he stood on exactly fifty years earlier.

We walked out to the yard and I recognized the doorway as the one from the book, where Steinbeck and Betty had stood. We snapped a few photos and continued on, creeping our way up the rickety stairway to the second floor and to Steinbeck’s writing room. It was indeed an inspiring perch and was no surprise that he wrote in another letter to Kazan: “I feel more at home here than I have ever felt in my life in any place.” Standing there, it was easy to understand the sentiment.

After ten days of traipsing around England through other literary haunts, I returned home to California. As I unpacked my bags, I came across a scrap of paper on which I had scribbled the name “Betty Guy.” The image of the woman in the red coat flashed through my mind and I sat down at my computer to begin another phase of research. Search engines returned several references to this painter, and I tracked down an address in San Francisco.

Three days after sending my inquiry, I returned from work to her reply: “That was a surprise opening your envelope with my photo . . . yes, lots of coincidences.” She left me with her phone number and an invitation: “Call me and we can meet.”

On a wintery Saturday afternoon, I ventured to Betty’s home. The years had altered her appearance since the photo with Steinbeck half a century prior. But the bright smile remained and I felt instantly welcome as she jokingly inquired about why I wasn’t wearing my red raincoat.

Betty’s house was an eclectic mix of her personal artwork, photographs, antiques and collected treasures from her many travels. Opera music filled the air and while Betty made us a pot of her “fancy” tea, I looked through a pile of watercolor paintings of European scenes piled up on the living room floor.

She related tales of dinner parties with poets, authors and artists; stories of traveling by ship across the Atlantic from the time she was 20 years old, meeting friends – like Steinbeck’s editor Pat Covici – who would be a part of her life forever. She laughed as she shared the memories of times spent with legends like Arthur Miller and Saul Bellow, and even a narrowly missed meeting with Marilyn Monroe.

I had not yet read Betty’s account of her meeting with Steinbeck, so I begged her to tell me the story. It was Pat Covici who provided the key, as he and Betty met on a ship while traveling through the Mediterranean in 1954. When Betty came down with a headache, Pat and his wife (who were traveling to visit poet W.H. Auden in Naples) offered her an aspirin and the trio spent the evening chatting and cementing a life-long friendship.

Years later, during the Spring of 1959, Betty stayed as a guest of the Covicis while preparing to leave for her annual painting trip to Europe. Pat received a letter from Steinbeck describing the cottage in England where he was staying, expressing his intense fondness for the place. That very letter – one I’d undoubtedly read for my own research – formed the center point of connection between Steinbeck, Betty and myself. It was the inspiration for commissioning Betty to go to England and paint this cottage as a surprise Christmas gift for the Steinbecks. And so it began.

There we were, half a century later, as Betty presented me with my own copy of “Surprise for Steinbeck,” the same book I had held in my hands on that blustery day in England. We looked at our photos side-by-side and laughed at the similarities – both of us in red jackets, bright-eyed, knowing we were standing on hallowed ground. She shared the story of her experience at Discove Cottage, meeting Steinbeck and spending meals together chatting over wine, becoming close friends. The details of her memories were recorded in the beige cloth-bound book, but listening to her relate her personal memories was the real treasure.

I visited with Betty several times, every meeting providing a wonderful glimpse into a life lived fully in color. On one such visit, she signed my “Surprise for Steinbeck” book, “As Ever – Betty Guy.” The real surprise, however, was the connection formed through a letter, a chance meeting and a tiny pocket of a distant land. No one could have expected such a gift. 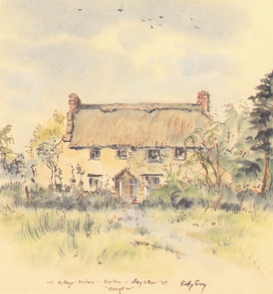 Under my feet are a great stack of men and women and I am sitting on the top of it, a tiny living organism on a high skeletal base, like the fringe of living coral on the mountain of dead coral rising from the sea bottom. Thus I have the integrity of sixty generations under me and the firm and fragrant sense that I shall join that pediment and support another living fringe and we will all be one. I’ve never known this sweet emulsion of mortality and continuum before.

-John Steinbeck, from Discove Cottage in a letter to director Elia Kazan