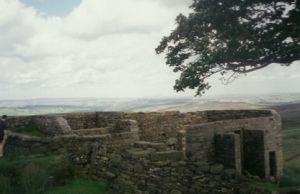 The sky felt like an extension of the earth, almost as if you had to duck down to avoid hitting your head on the clouds. Walking on the Yorkshire Moors was like nothing I’d ever experienced.

My friend Eric and I embarked early in the day upon the six-mile hike to Top Withens – an abandoned farmhouse, now in ruins, which has been associated through the years as being the inspiration for Wuthering Heights (Heathcliff’s home in the novel).

“Wuthering Heights is the name of Mr Heathcliff’s dwelling. `Wuthering’ being a significant provincial adjective, descriptive of the atmospheric tumult to which its station is exposed in stormy weather. Pure, bracing ventilation they must have up there at all times, indeed; one may guess the power of the north wind blowing over the edge, by the excessive slant of a few stunted firs at the end of the house; and by a range of gaunt thorns all stretching their limbs one way, as if craving alms of the sun.”
– Wuthering Heights by Emily Bronte. 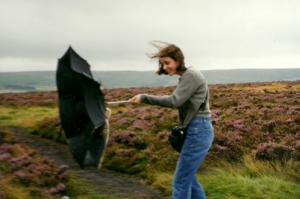 The moors we walked that day were blustery, windy, rainy and cold. It was perfect. Few others braved the elements, but we were determined to reach our destination (at least I was determined – and lucky to have a willing participant in my adventure). 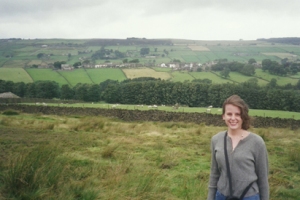 The path took us through fields of heather, over stone fences, past herds of sheep, rambling creeks, and sweeping views that took our breath away. The storm clouds threatened, but thankfully avoided an onslaught until we made it home.

Maybe I was caught up in the place and time, but at one point I swear I saw a woman wearing a brown cloak standing ahead of us on a bluff. I yelled to Eric and pointed; he acknowledged seeing someone standing there as well and then suddenly “she” was gone. The rational side of me knows this was most likely a figment of our collective imagination, but I still am convinced the spirit of Emily (or perhaps Charlotte) was with us that day.

The ruins of Top Withens came into sight and I bounded ahead, anxious for a few minutes alone with the place. As I approached, a fierce wind blew through, rattling the one wooden door still in place and startling a baby sheep and her family, which went running away.

I stood there for a moment, completely overwhelmed by the scene. This was it. Despite the large sign informing wistful visitors like me that this place “bore no resemblance to the house she described” in Wuthering Heights, I knew this had to be her inspiration. The Bronte Society 1964 wasn’t going to rain on my literary pilgrimage parade.

We explored the ruins of this former farmhouse, which hadn’t been occupied since the 1920s. Wandering through the remaining stone walls, below an ominous sky with a vast landscape of wilds as far as the eye could see… there are no words to describe it. I’ll never forget that day.

The hike back was a bit more brisk, as the clouds became more threatening. We returned to the town of Haworth just as the clouds opened up. Hungry and tired, we made our way to a pub for a well-deserved warm meal. We sat down and I realized they were playing Sting’s Ten Summoners Tales – my favorite album of all time. The day really could not have gotten any better.

After dinner, we walked back to the inn. I told Eric to go ahead, and I made my way into the dark, drizzly graveyard by myself. I stood in the middle of a sea of crumbling gravestones with the Parsonage visible through the haze. The ghosts of the Bronte sisters seemed to dance in the wind. I thought of how these women thrived in this desolation, enduring relentlessly harsh conditions, fateful illnesses, alcoholism and depression, heartbreak and disappointment. Yet, they created timeless stories that continue to inspire modern romantics like myself, who stand in graveyards trying to conjure their spirit. I am honored to have been in their presence.

I e-mailed a copy of Part 1 of this section to my friend Eric, who was on this journey with me. I hope he doesn’t mind me sharing a portion of his response. He captured it perfectly:

That place still haunts me in the best of ways. We were characters in a movie that summer; no other way to explain it to anyone else.