There is a piece of art that has hung in my bedroom for the past twelve years. It’s become a fixture in my life, something I pass by daily and occasionally take a moment to consider more deeply.

In the Spring of 1999 while working at a high-tech PR firm in San Francisco, I received a mysterious tube-shaped package from my college friend Carrie.   I was awestruck when I unrolled a chalk rubbing on butcher paper taken directly from my favorite author, F. Scott Fitzgerald’s gravestone in Rockville, Maryland. It was an instant source of serenity in the tech-centric dot-com world in which I’d suddenly found myself immersed. To this day the rubbing (which I immediately had framed) remains one of the best, most thoughtful gifts I’ve ever received.

The quote engraved on Fitzgerald’s grave is the final line from The Great Gatsby:

So we beat on, boats against the current, borne back ceaselessly into the past.

It’s a tragic reflection of the common challenge of living in the moment. This time of year, when winter is most bitter and the ghosts of beautiful lost spirits pervade, I find it to be even more of a challenge.

For the past three years at this time I’ve lost an incredible woman in my life to cancer. Last weekend while at the celebration of the life of my former mother-in-law, I marked the second anniversary of the death of my beloved Aunt Helen. One year ago last week, a dear friend of the family passed away. I’ve come to dread this time of year. 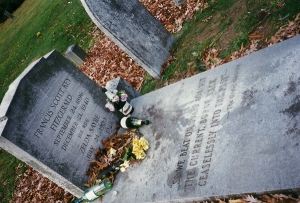 Soon after receiving Carrie’s gift, I made a trip to the East Coast to visit Fitzgerald’s grave myself. It’s in an odd location – a small sanctuary in the midst of busy streets and city bustle. It looks like any other grave, except for a few empty wine bottles glistening in the sun on the headstone – homage to the Jazz age he depicted so vividly. I can’t help but notice that he died in the depth of winter. 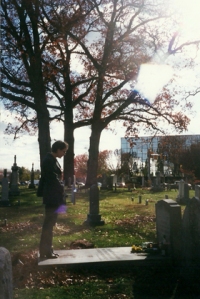 The setting of the grave site he shares with Zelda – in the shadow of modern suburban office buildings with cars buzzing by – has never seemed fitting enough for such a master of American literature. I’ve begun to wonder if there’s more to this seemingly haphazard placement. Gatsby lived large, among sprawling grounds and lush gardens. Yet, he could not grasp the beauty of the moment, doomed to a life of regret and unfulfilled desire. I think Scott might get a kick out of the reality of modern life that’s grown to encroach upon his final resting place… one final symbol to teach us something about finding serenity in the midst of chaos.

I still hear my Aunt Helen’s voice. On cold, rainy days I let the memories linger a bit longer. When it clears, I do my best to move my boat out of the current.